At the start of April was Pi Wars 3.0, the third instalment of the Raspberry Pi robot challenge event, taking place up at the Cambridge Computer Laboratory once again. There were quite a few differences this time tho, the main one being that the event was held over two days instead of just one. The Saturday being for School teams, and the Sunday for the beginners, intermediate and pros/veterans.

Other changes were the introduction of two new challenges, Slightly Deranged Golf and Minimal Maze. Both proved tough new additions, with the smaller robots struggling with the 'grass' on the golf course, and the larger robots struggling to grab the golf ball when it ends up on the edges of the course. Whereas not many robots managed to successfully navigate the Minimal Maze at all, it being an autonomous challenge.


The obstacle course also got an upgrade, doubling in size with several new obstacles to get around. Whilst the sharks were lacking in lasers quite a few robots ended up falling afoul of them, coming off the raised platform to end up sleeping with the sharks (At least until being rescued). The pebbles and scrunched up paper also being a surprisingly difficult obstacle to overcome, especially for those robots with low ground clearance.
I decided to attend both days and, as I was only competing on the Sunday, volunteered to help out on the Saturday. Vaguely expecting to be given a clipboard and stopwatch to manage one of the courses for a few hours I was instead given the task of judging the Technical Merit category. Luckily, instead of having to chase down all the teams myself, it was decided that this year it would make more sense for the judges to be in one spot and the teams to instead go visit them.

To keep things streamlined I was joined by both the Artistic Merit judge (Hannah) and the Funniest Robot robot judge (Jim) at a table up in the 'quiet area' where we could all view each team's robot as it arrived and not make each team repeat the same answers three times! Over the two hours we saw 19 different robots, slightly less than expected, which ranged from the relatively basic (an ice cream tub with wheels) all the way up to the complicated (robot arm attachments, musical robots, motion controlled robots). The teams them selves varied quite a bit as well,  with a couple where the adults did most of the talking, to those where the kids explained every single detail of their robot, usually accompanied by extreme amounts of enthusiasm.

With the judging out of the way it was time for a late lunch and then a look around the rest of the area, browse the shops and stalls, visit the 'show and tell' type areas and watch a few of the robots tackling the challenges.

Eventually I drifted over to the Pi Noon area, along with a growing crowd, to watch (and recorde) the finals (including the quarter and semi finals). Pi Noon had a few minor changes for this year, instead of a single balloon to pop each robot was adorned with three balloons, with the winner being the robot which popped the most (or all ) of the balloons in three minutes
With Pi Noon complete it was on to the prize giving before a bunch of us headed out to dinner until late.

Sunday started at around 3am, as several people ran through the corridor of the Travel Lodge I was staying at, and I would be competing with my robot 'PiSquared' in the Pros/Veterans category . At the previous Pi Wars events I had dressed up, so this year I did so again turning up as a Fallout 4 'Vault Dweller', complete with Vault Boy bobble head for my robot and a Raspberry Pi powered PipBoy. The PipBoy was actually part of my 'robot' solution, forming a Bluetooth network that tied together the Pi Zeros connected to the motor drivers and the sensors, allowing them to communicate amongst themselves.
My first event was Pi Noon, so no time for warm ups, just straight into the action. Last Pi Wars I made it to the finals, this time I didn't even make it into the first round, losing all three of my balloons to one of my opponents.


Next up was the Obstacle Course, which turned out to be my best event of the day, completing it in just under 1 1/2 minutes to finish 2nd in my group and third overall. My first attempt around the sharks had PiSquared falling into the pit, but I was able to reverse out, limit my max speed down to 25% and making it around the pit on my second try. Unfortunately I didn't manage to get a video of my attempt, instead finding I had a short recording of me setting up the camera...

As soon as the Obstacle Course was completed it was over to skittles, with a couple of practice runs showing that the servo controller hoop mechanism just wasn't coping with moving the wooden ball around, slipping off the servo, so I changed over to just pushing the ball.  This didn't go all that well as the hoop mechanism was now catching on the ball, stopping me from getting a clean hit, and I ended up with a total score of 2 skittles knocked down!


I ended up skipping the next two challenges, Line following and the Minimal Maze, as I just didn't have the sensors working well enough to compete. This left me with an hour or so break to grab lunch and recharge batteries... Unfortunately the battery I was charging decided to give up the ghost, getting rather hot and swelling to a large size. Luckily I had been charging it in a fireproof bag and I took it outside to cool down for the next few hours (Of course if it hadn't been in the bag I may have seen it start to expand and stopped it earlier).
Golf was up next and this time I completely forgot the camera! The little cage attachment I had created worked mostly okay. The ball did escape when heading down the initial incline, and the size of my robot made it a little hard to recapture on the bend, but I got the ball around the course on both attempts. The first time getting it in the hole, and in the second attempt it rolled behind the windmill. 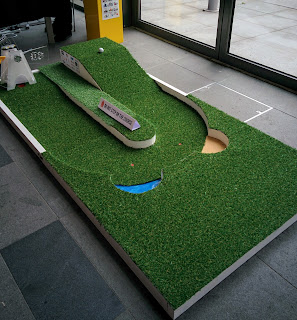 The final event for me (As there would be no more Pi Noon battles) was the straight line speed test. This year the challenge was autonomous only, as opposed to either in previous attempts. So I sent PiSquared trundling down the track, requiring several rescues to reach the end. I even manage to repeat my PiWars 2014 trick of finishing a run with one less wheel than I started with... I suspect that run didn't count in the end.

With all my challenges completed I packed up most of my stuff and headed on down to watch the rest of Pi Noon. This time remembering my camera and tripod! Sunday didn't seem quite as busy as Saturday, despite there being an extra 16 teams competing. I guess the overall team size was higher on the Saturday, with lots of school kids and parents around.


So how did I get on? Well not so great in the end... My best result was in the Obstacle course, but this was balanced out by doing rather poorly in the skittles. My worst event was, technically, the line following and minimal maze as I ended up not even attempting them :( For the other events I was kinda middling and, despite getting into the Pi Noon finals last time, this year I got knocked out in the first round!

So what happened? To a degree I think this was down to my inexperience in 3D design, having only previously designed very simple components I had a lot to learn, and plenty of trial and error, to design the robot chassis, interchangeable front wing, rear wing and other accessories. Added to this was the sheer amount of time it took to print, the main chassis itself coming in at just over 20 hours, the rear wing 5 hours and the front wing 2+ hours. My 3D printer was running almost constantly for the month leading up to Pi Wars itself and I still had stuff being printed as I was packing up ready to leave.

With all the time spent on getting the hardware ready it left very little time to actually work on the software, the main reason I didn't try the line following and minimal maze challenges. So how to improve? Well having a second printer up and running would have helped, and I started using the 'cut' functionality of my slicer to only print out the part of the model I'm currently working on. There were several accessories that I had the parts for but not the time to assemble and test (I had several plans for skittles, one involving a drill, another a mallet), which if completed would made my robot more competitive.

Being a totally new design there was quite a lot of work and time spent before having something that could actually move around, so if there was a Pi Wars 2018, and I was competing, then I'd be looking at doing an improved/finished version of this design. I do want to finish getting the sensors and so on working, hopefully getting stuff to a stage where I can release the STLs and software for other people to use. Possible even have it slightly improved for the Egham Raspberry Jam later this month.

Other than that there are several projects that I've had on hold whilst working on Pi Wars that I'd like to get back to, as well as some blog posts I need to write (Like how I finally got a bluetooth network up and running!).