Whilst the robot I posted about in my last blog entry is reasonably compact and contains most of the components I'll be needing for the PiWars 2017 challenges, in practice it feels a little bit sluggish and under powered, and not something I'd be confident entering into the Pi Noon challenge. So I decided what was need was a slightly bigger robot.

Now as the robot is 3D printed I can just scale it up to the size I want yes?  Well, unless you have a fully working replicator, its not quite that easy. The plastic parts scale up nicely the motors and other electronics don't. The weight increases, so you need bigger motors, then bigger, however the batteries, and possibly a higher rated motor controller. Then you need to make all these bigger components fit on the robot and suddenly it feels like you have less space than you did before!

I stripped all the parts from my PiWars 2015 entry and went through several revisions of the scaled up chassis, trying to work out how to make everything fix together.  Eventually I did a spot of rewiring on the controller, cut off some pins and finally came up with the following.


The new Pi Squared chassis is considerably larger than the previous variant, as well as gaining a rear wing, just fitting inside the maximum dimensions allowed for PiWars. The front wing is now removable, allowing the chassis a bit more space on my 3D printer, and can be swapped out for the various different challenges, although the only one I have prepped so far is for Pi Noon.
The downside to the increased size is it takes a lot longer to print. The chassis takes just over 20 hours to print, the rear wing 5 and the front wing another 2...So my printer has been running almost constantly for the past week!

The control method is my usual PS3 controller, with a simple python script driving the motors, making use of pygame and the GPIOZero library to keep everything simple. In fact the entire code is rather small.


Finally here's a quick view of the new and improved Pi Squared running around.


With only a week left until PiWars I still have a lot to do, sensors to attach, code to write, practising driving.. So its going to be a busy weekend and evenings for the rest of the month!

Having considered the various challenges that will be present at Pi Wars 2017 next step is to give some thought on what type of robot I'll be needing to tackle them. Now the sensible approach would be to use my Pi Wars 2015 entry as a starting point, after all its a fairly solid base, improve on the returning challenges (e.g. the line following) and add additional functionality to handle the new challenges.

Of course that isn't the approach I'll be taking, although it will be the backup plan, instead I'm looking at starting afresh and putting together a new robot for Pi Wars 2017. To a degree this is because I have new ideas and new components I want to try out, as well as the fact that my Pi Wars 2015 entry didn't turn out to be all that interesting.

There are various components you need to put together a robot and, fortunately, in the run up to PiWars 2017 the MagPi Magazine has run a few articles, starting in Issue 51, on how to build a remote controlled robot suitable for Pi Wars.


So what do we need? Well I will be going for a wheeled robot once more, either a two or four wheeled variety, and I'll be aiming to reuse some of the motors and wheels from previous robots. At last PiWars I took a selection of wheels but ended up not swapping them out for specific events as the motor connections were a little fragile, so that's an area I want to improve this year.

As far as the motors go I want to investigate using stepper motors to try and get a bit more precision in some of the autonomous challenges. I have a set of four from a 3D printer, as well as a couple of larger ones salvaged from an old Laser printer.


Next up is the motor controller. Here I have a choice of reusing the motor driver from last year as well as using some of the other's I've purchased over the years. The final choice is liable to be determined by the motors/wheels I end up using, and indeed I may need more than one motor driver, especially if I want something to propel the skittle or golf ball at a high speed.
A robot won't move without power, and once more I'll be going with Lithium Polymer ones for their high power in a small package. I've not yet had one explode on me... however there have been a few sparks, so you need to be careful handling these.

Next is the brains of the robot, last time I used a Raspberry Pi A+ for its mix of smaller size, reduced power consumption and camera connector. This year I'm currently using a RPi 3B for its additional power (In case I do image processing) and its built in WiFi and bluetooth. Although I'm also planning on using some PiZero for supporting roles.


Next up on the list is the chassis, something to fit all the above components into, along with the connecting wires as well as any extra sensors or components required. My first Raspberry Pi robots were based around the BigTrak toy and other people have has success with other large plastic toys (preferably ones that already have motors in them!).

Cheaper alternatives are empty food or packaging boxes (e.g. ice cream tubs, the CamJam EduKit box) as well as various project boxes available at Maplins or similar places. I used a project box for PiWars 2015, but ended up finding it to be a little restrictive in getting all the components connected to it, and overall ended up with a fairly plain looking robot (especially when compared to my Pirate ship from the first PiWars!).

Luckily I have a much more flexible option this year, a 3D printer! Allowing me to, in theory, print out the exact shaped chassis I want.  Of course that is entirely dependant on me being able to design it in the first place....

I've only created fairly basic objects to print before, so I thought I'd have a little practice by creating a chassis for a simple ZeroBorg based robot using 4 of the little micro metal gear motors to drive around. This took a few iterations but I generated a simple chassis that looked like it was going to work... apart from one small detail I missed. 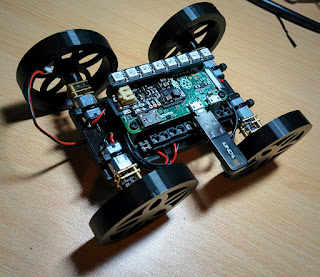 Yes... I forgot to allow space for batteries to drive the motors.... I ended up balancing a 9V battery pack on top of the PiZero, but that wasn't exactly ideal...

So it was back to the drawing board to come up with something a little better looking for PiWars and, after quite a few more iterations I've come up with the following (Which takes over 4 hours to print if I want it good quality!). 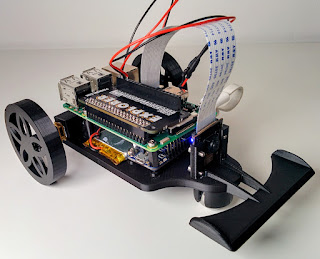 Still needs more work but its a Raspberry Pi 3, with camera, along with 2 motors, a LiPo battery and an AdaFruit PowerBoost 1000C to allow the LiPo battery to be charged without having to remove it, or interrupt power to the Pi3. There are liable to be many more iterations (It needs sensors/attachments for some challenges, maybe bigger motors/batteries too), but I'm hoping to keep to this general shape for the final event (only a month away now!).

So that is how I'm planning on building my robot! More or less.. Obviously I have a lot more work to do, but already its looking nicer than my last attempt!.