Controlling a 3D Printer with the new Raspberry Pi Zero 1.3 - follow up

Back in May I wrote a blog entry describing how I'd used a Raspberry Pi Zero to control my 3D printer and, at the time, came to the conclusion that the RPi Zero was indeed a viable alternative to the standard model Raspberry Pi once they were more readily available.

It took a while but I eventually ended up with enough Zeros that I felt I could dedicate one to controlling my printer and have been running it successfully for the past couple of months. My original goal for switching to a Zero was based around building a more compact solution, as opposed to a cheaper one, and I went through a couple of iterations to end up with my current solution.

The original test setup had cables, adaptors and components all haphazardly laid out, but since then various adaptors and boards have come out to provide additional connectivity to the standard Zero.
The first setup I tried was the Zero4U board, a 4 port USB hub that fits underneath the Zero, allowing both the printer and a USB WiFi dongle to be connected. Whilst that worked I was under using the hub itself, and it still looked a little untidy with the dongle and cables sticking out on multiple sides.
My next, and ultimately final, setup was using the RedBear IoT pHAT to provide the Zero with a wireless connection, leaving the single USB port available for connecting to the printer. The final step was getting a USB micro to mini OTG cable to allow connecting the printer without needing an extra adaptor. I decided to use a ZeroView board to mount everything on (due to having one spare) and then quickly designed and printed a support to mount it all on, with the camera pointing at the bed. 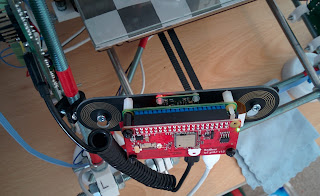 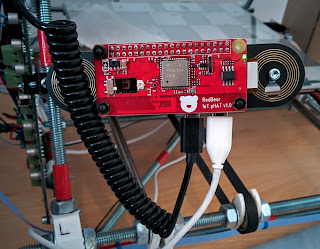 As mentioned earlier I've been running this setup for a few months now and the only issue I've run into was a failure when printing a 3D Benchy, which I thought may be an indication that the Zero was struggling to deal with larger gcode files. However I got a similar result after switching back to the RPi B+ (which had successfully printed 3D Benchy in the past) so have put that down to either one of the printers motors overheating, or an issue in the produced GCode.

I never got around to mounting my RPi B to the printer, so whenever it got moved (albeit rarely) I had to move the RPi and printer separately. With this new setup I can just unplug the power and lift up everything as a single unit, and I have indeed taken this setup to a Raspberry Jam to show it off.